When I was a kid, I wanted to be a rock star. I had genuinely convinced myself I was going to learn to play all the instruments in a band so that I could play on stage at different venues and be awesome. Eventually I got bored of that idea and decided to become a rock collector in search of the “perfect rock”. That lasted almost three months until my backpack got too heavy to carry around with all the rocks I collected.  So then I decided I wanted to be an archaeologist and dig for dinosaurs in my backyard. That lasted about a day until I realized digging for dinosaurs literally meant I would have to dig. So then I turned my focus to becoming a writer for the purpose of  making it on the cover of Time magazine as the “Writer of the Century.” Apparently just becoming a writer wasn’t good enough. I needed to become the writer of the century.

I clearly had a lot of big ideas and aspirations growing up. Even at present, I sometimes find myself planning some grandiose event or project, even when I have no business in the matter. Having these big dreams may be good sometimes, but sometimes knowing which ones should take precedence really helps with productivity.

Last week as part of a class assignment, we were asked to watch this video:

We were then asked to take The Fascination Test Sally Hogshead talks about in the video.

According to Sally, everyone has specific triggers that define their personality, or as she puts it, your brand. After taking the test, I found out that  my primary trigger is PASSION and my secondary trigger is PRESTIGE.  Together, these two triggers create what’s called “The Talent.” (See image below from the results)

So what does this all mean? 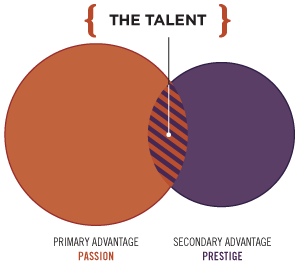 Well, according to the results, I have “vivid aspirations [and] fearlessly dream big”. Check.

I am also “an optimistic and ‘big picture’ thinker, intuitive, expressive, social, impulsive, ambitious, uncompromising, focused on adding value through better execution, conscientious of the smallest details and expect the highest quality deliverables from myself and others”….And on and on it goes…

What I really liked about the report is that, unlike so many other of these types of tests, it also suggested an action plan for the best use of my strengths (and yes, even my weaknesses) in my everyday personal and professional life.

So while there isn’t anything wrong with having a ton of big ideas and dreams, knowing about yourself really goes a long way in the process of achieving these dreams. What I find comforting is that I actually have been able to take my big dreams and make them amount to something. Let’s see how my next dream fares…